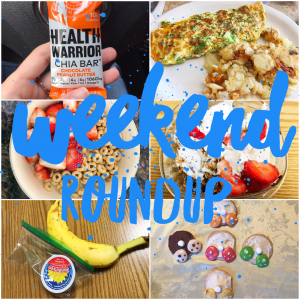 What does a dietitian eat?  Healthy foods all the time?  NO!  Organic foods daily?  NO!  Super small portions?  Nope!  Dietitians are just like you!  We have food days that are super healthy (fruits and veggies at every meal, lean proteins, alcohol free and no sweets!) and we have days that are not as healthy (think chocolate, beer and nachos).  Check out my weekly weekend roundup posts so you can see what my weekend eats are all about! 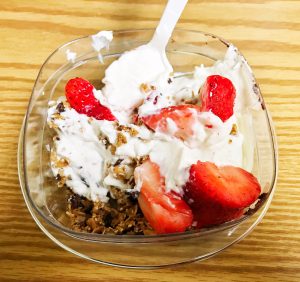 Lunch:  Lunch was my Mexican Quinoa Bowl.  So delicious and filling! 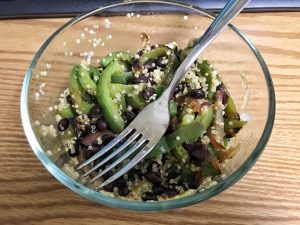 Snack:  For snack I had a banana that I had taken from the Flywheel Sports chelsea location the night before after my workout and 1 tbsp of sunflower seed butter.  This is such an easy snack and tastes AMAZE. 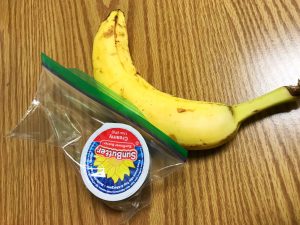 Dinner:  NYP had a free cycling promotion, so after work I headed over to Flywheel Sports for the second day in a row and got in an awesome workout!  When I got home, I was ravenous.  We were supposed to go to a Midnight Market event again, but Bernie wasn’t feeling well, so an egg scramble was my dinner instead!  I sautéed kale and onions and added 1 egg and 1 egg white with cheddar cheese.  This was a good example of how I am as a cook, because I dropped a whole egg on the floor in my haste.  I definitely need to remember to SLOW DOWN when I am cooking sometimes.  I ate this with two slices of whole wheat toast.  YUM! 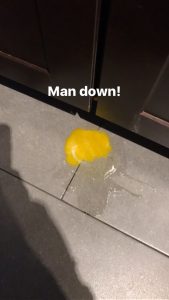 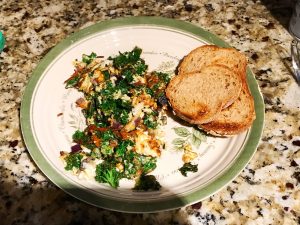 Breakfast:  We were on Long Island for the weekend and I had to do a 9 mile run.  My breakfast was a bowl of honey nut cheerios with strawberries and almond milk and a cup of coffee.  After eating, I waited about 1 hour until I decided to go for my run.  I also drank plenty of water beforehand.  During my run I ate one clif bar c-blok to give me a bit of fuel.  I forgot my water on the run, though, and totally regretted that!  I was super thirsty and it definitely affected how I was running.  I came home and drank water for the rest of the day.  The run went pretty well and we are coming up to the final month before the half marathon, so I am getting pretty pumped! 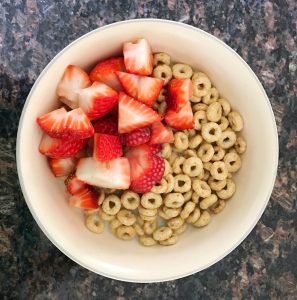 Lunch:  After my run, lunch was two slices of whole wheat bread, turkey breast and 2 slices of Colby jack cheese with some brown mustard.  YUMMO! 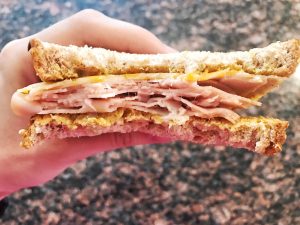 Snack 1: Bernie and I left to do a bunch of errands and I brought a health warrior chocolate peanut butter chia bar along for the ride. I also got an iced coffee at Flux Coffee. 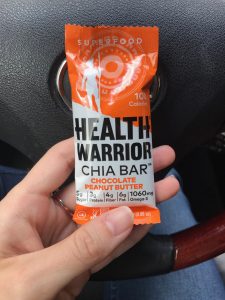 Snack 2: After the errands we still had some time before dinner, so I had a few sea salt multigrain tortilla chips with hummus and then went to get pedicures with Gina.  WOO!  A pedi felt so good after my long run!  New tip I learned – don’t wear skinny jeans to get your nails done – the nail lady was sweating so hard after trying to pull my pants back down over my monster calves!  Whoops! 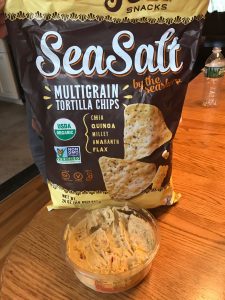 Dinner:  For dinner, my mom made paninis with whole wheat rolls, mozzarella cheese, grilled chicken and roasted red peppers.  I had one of those with a balsamic, apricot glaze and some salad on the side. 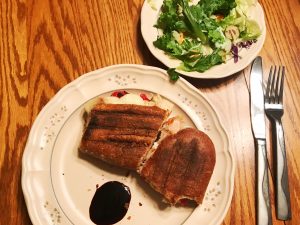 Dessert:  We spent some of the night stuffing easter eggs for the easter egg hunt, so I did sneak a few bite sized candies and peanut M&M’s during that 🙂

Breakfast:  Sunday morning, I went for a 45 minute bike ride and did some ab work before mass.  After Easter mass, we went to the diner for some breakfast before having to set up the house to have people over.  I got an omelette with broccoli and cheddar cheese and a side of potatoes.  I had about half the omelet and a quarter of the potatoes and a slice of wheat toast with some coffee. 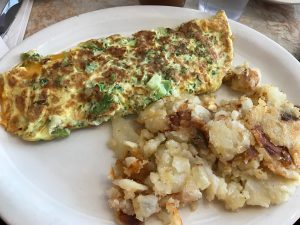 Lunch and Dinner:  I had a few bites of different appetizers before dinner – ham and cheese Stromboli and bean dip with tortillas chips.  For dinner, I had chicken, garlic bread and asparagus.  I also tried lamb.  I have to say I was not a fan of the lamb, but everything else was awesome!

Dessert:  Aunt Di’s famous desserts were back again and you know I had some!  TWO WEEKENDS IN A ROW!!!  I had some apple strudel and a brownie.  Then I got to take some apple strudel home too!  DELICIOUS!  Here’s a pic of her amazing cake (I didn’t eat it because I’m not a huge cake fan).  But how cute is that?!  Also here are a few of the “bunny butt” cookies she made!  I may have had a few bites of one of these too 🙂 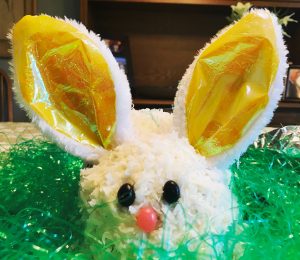 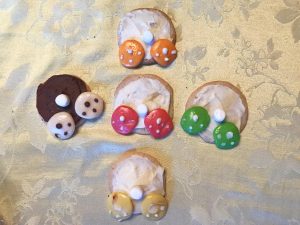 There you have it!  A weekend full of dietitian’s eats! 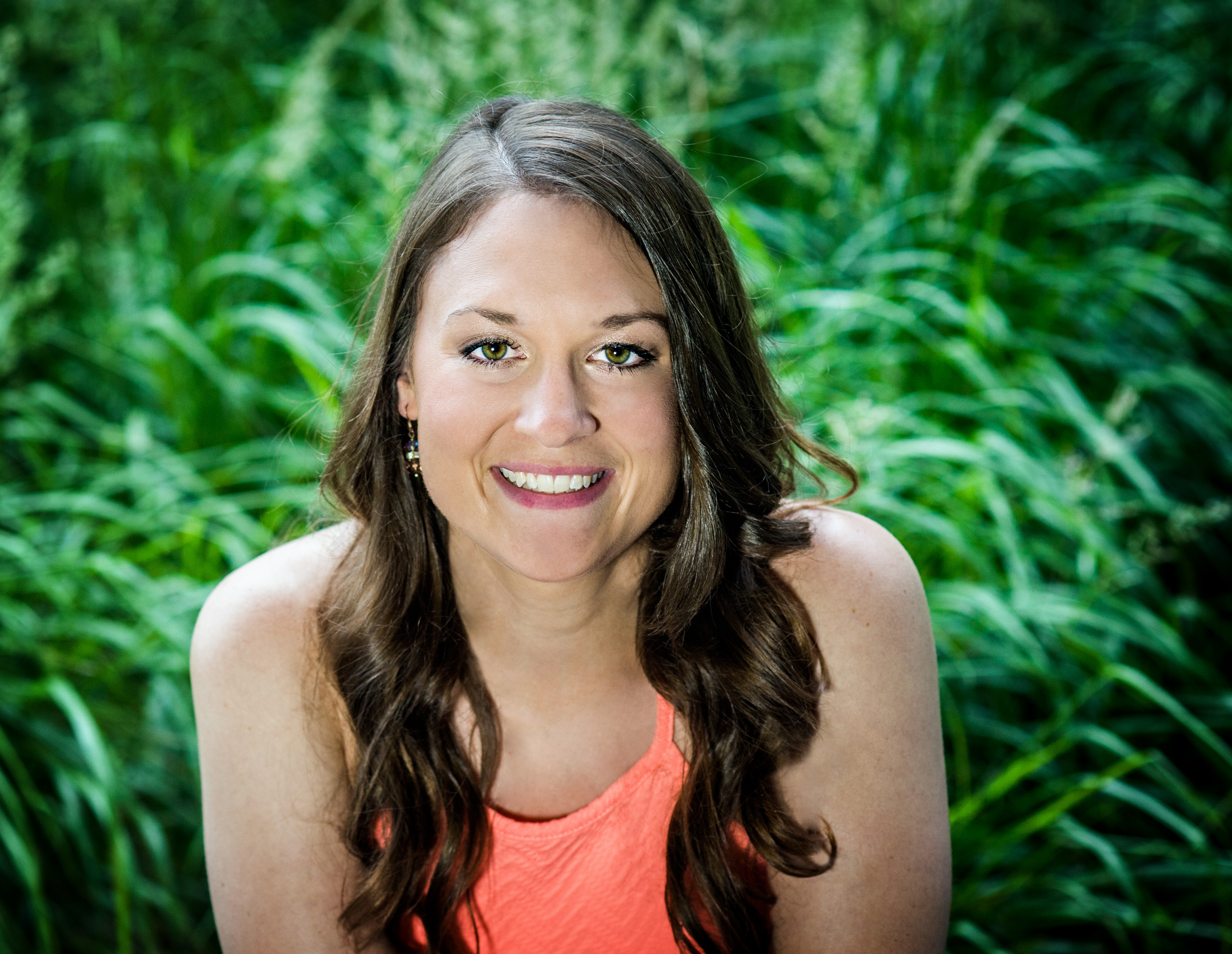